Nanotechnology In The Workplace – Is It Safe? 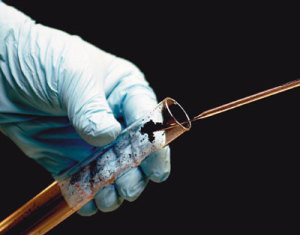 Because of the avalanche of products in the market that make use of the concepts of nanotechnology, how can we make sure that workers involved in this field are aptly protected from the several risks that are innate when dealing with these miniscule materials?

With the way things are going, if the ideas of nanotechnology will be integrated in the world that we are living in, companies have to make products which involve them. We often hear talks about the potential risks of nanoscale science products to consumers who will be purchasing them; but did we stop and think about the individuals who are behind these things?

Scientists, engineers and factory workers who are working on producing cutting-edge results may be exposed to high levels of, say, titanium dioxide in sunscreens, and other kinds of nano-sized particles than the general public who will end up purchasing them. Aside from that, unlike regular engineering industries that involve chemicals where the exposure of workers to health hazards is often regulated, there is still no clear evidence whether ventilation systems, filter or protective masks would be sufficient in preventing dangerous exposure to these nano-sized materials.

Although there are a plethora of regulations currently being implemented for the safety of workers in the workplace from the risks provided by numerous harmful chemicals, nanoparticles are often not considered in the equation. Recently, for instance, the European Union introduced the Registration, Evaluation, Authorization and Restriction of chemicals (REACH) legislation in order to govern the import, use and production of chemicals, but it did not acknowledge the new and unique risks that are involved in the nanotechnology industry.

According to Institute of Nanotechnology’s CEO, Mark Morrison, REACH failed to specifically differentiate between nano and bulk forms. The whole premise of the use of nanoparticles is to be able to exploit the properties of a certain material and test it when the size of an object is reduced. Therefore, a chemical that can be inoffensive whenever it is in bulk form may be possibly harmful at an atomic scale.

An analysis made by Professor Maria Giovanna Mattarolo showed that the protection given to workers is not adequate because there is limited scientific knowledge regarding the effects of exposure and the dose which the body can tolerate. Despite of the commitment from several international agencies, there are still many unknown points regarding how nanoparticles can affect and interact with the different body systems.

Mattarolo emphasizes that the regular risk assessment methods which are being required by several international directives cannot be sufficiently applied when it comes to the perils involved in the field of nanotechnology because they are based on the earlier determination of potential or real risks in the use of known or recognized materials. She says that the primary question we are facing in the use of nanotechnologies is if the healthy and safety measures which were decided by employers would be enough. Shouldn’t we assume that when it comes to new materials, legal provisions on safety are respected when there is no clear data to support the same?