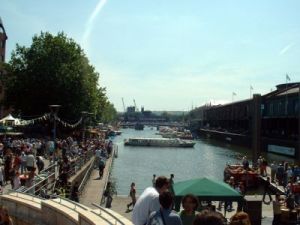 After his bicycle allegedly got stuck to a track in the dockside, a father-of-two died due to drowning after plunging into the historic harbour.

Forty-year-old Sean Phillips, a resident of Backwell, was training for a cycle ride for charity along the Bristol harbour when the wheels of his bicycle got caught in the rails after losing control of the handle. Passers-by immediately plunged into the waters in an attempt to pull Phillips out but he died instantly at the scene.

For almost a decade, the coroner’s court of Avon has heard the Bristol city council’s concerns regarding the safety of cyclists in the specific section of the harbourside, which is near M Shed museum.

Maria Voisin, the coroner who examined the body, concluded that the cause of Phillip’s death was accidental, and she suggested that several changes should be implemented in order to ensure the public’s safety.

Stuart Miller, an eyewitness, said that while he was on his way to work, he heard a clang and a rattle. When he turned around and looked to the left, he saw the rear wheel of the bike jammed to the track, which caused Phillips to eventually lose balance.

He adds that he spotted Phillips as he toppled over the side of the dock and noticed that he was laying face first in the chilly water.

According to David Martin, operator and manager of Bristol Harbour Railway, he has worked on the site for almost 40 years and he has witnessed numerous bicycle entrapments.

He estimates that during that period, an average of one cyclist per month has experienced one of their wheels being caught in the tracks.

The inquest analyzed a risk assessment made by the council a few years ago which identified that many cyclists have experienced numerous accidents near the quayside.

However, it was not until eight years later when a formal assessment of risks was carried out. Due to the results of the said report, coupled with further assessment five months after, a recommendation regarding the erection of safety barriers was reached. In fact, the report even warned regarding the urgency of the said action because a lot of incidents have already occurred.

Following the said event, an order requesting for an independent report was done and when it was completed nine months after the initial account, it was recommended for the use of safety barriers. Orrett said that the results were rejected because the council decided to the commission of further reports.

After the inquest, Hayley Liddle, forty-three-year-old partner of the deceased Phillips said that his death has been a total nightmare for the whole family.

On a final note, she pleads that steps must be positively taken in order to guarantee the safety of the general public especially since the path is a public property and numerous people use it daily.