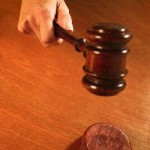 Two businesses have received fines totalling $35,000 after a contractor had his thumb crushed in an unguarded machine.

Regional Director, Shane Gillard, said removing guarding from a machine was a recipe for disaster and urged businesses to revisit safety practices around machinery before it was too late.

“Guarding is there to protect workers from being seriously hurt or killed, yet we frequently come across incidents where someone has suffered a serious injury that could easily be prevented,” he said.

The worker’s thumb was crushed on 29 September 2010 while operating an unguarded operating press after a safety device that stops the machine from working when guarding is removed was taken off.

The court heard the device was removed by co-accused, sub-contractor Leslie Grinter, who was engaged by Greg Sewell Forgings to carry out work and training at the site.

Mr Grinter spent 10 minutes removing the device on the day of the incident then trained the worker to work the press without the guard.

Mr Grinter later told WorkSafe investigators he was aware the press was being used by the worker without the interlocked guard.

WorkSafe’s investigation found the company did not know the interlocked guard had been removed by the sub-contractor, but failed to provide proper supervision, instruction and training.

Greg Sewell Forgings was this week fined $30,000, without conviction, while Mr Grinter received a $5000 fine in May after pleading guilty to failure by a self-employed person to ensure people are not exposed to risks to their health and safety.