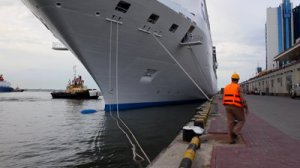 Dock workers have recently launched an attack on the bosses of their industry for ignoring their proposed amendments on the work safety code eight days following the death of an employee on the wharves of Melbourne.

Another One Bites The Dust

Anthony Attard, a 42-year-old Toll Shipping employee, who was assisting in the loading of cargo for a vessel which was docked at the Melbourne Port last May 20, was crushed to death after being run over by a big trailer. Paramedics made their way to the waterfront but failed to revive him.

The death of this father of three is among the plethora of recent accident runs which have caused serious injuries to waterside workers and has sparked calls for the introduction of tougher safety laws.

According to Anthony Attard’s brother, James, who was working with him at the Port of Melbourne, his brother always reminded him to have eyes even at the back of his head and to always look out of things. He adds that Anthony was among the most careful employees in the port.

"Exposure to heavy machinery every day and working with them is dangerous. Safety should always be a top priority, regardless of where you are employed", James Attard said.

A new code of safety practice, which is intended to provide amendments to the old national guidelines, is currently being developed and formulated by Safe Work Australia. They are gathering data from the union, stevedoring companies and a group of regulators.

However, the Australian Logistics Council has nothing but criticism for the new draft, saying that it should not be pursued at all.

Last Friday, a statement from the Maritime Union of Australia said that the comments from the council were disgraceful, which is enough proof that they have little regard for the safety of the workers in the stevedores industry.

Warren Smith, assistant secretary of the union, said that for this month, they have witnessed another employee being killed on the waterfront, in an accident which was generally preventable. His co-workers were all completely and totally traumatised, seeing one of their friends die and struggle in front of them.

He adds that to have the Australian Logistics Council announce just one week after one of the workers died while doing his job that they do not want to reduce safety in the waterfront port is abhorrent and unacceptable.

Smith adds that Anthony Attard’s employer, Toll Holdings, is one of the members of the logistics board. To have him disagree with the safety draft makes the issue more disgusting and damaging.

He reiterates that companies can tell the whole world that safety is their top priority – they can place it on their letterheads, wear it on their shirts, or even indicate it on their emails – but the truth is that they value profit more than the lives of their people.

Safe Work Australia announced that the national stevedoring code draft aims to strengthen regulations targeted at managing some hazards when unloading or loading cargo, wharf stacking, and delivering and receiving cargo from other terminals in order to better look at the risks that are involved in the industry.