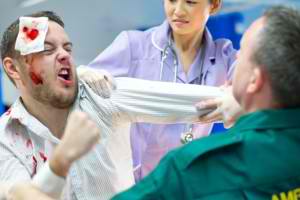 The Auditor-General’s report revealed that a case wherein a pregnant nurse was kicked in the stomach was merely categorised as a “minor incident.”

Reports of the Auditor-General on investigations into occupational violence discovered doctors and nurses alike regularly encountered unacceptable risks that could otherwise be prevented. However, staff were hesitant to report these attacks because they generally find the process cumbersome, and they were unsure about whether that would bring about any changes.

Other similar cases that were considered as merely “near miss,” “no harm,” or “mild” included those that involved a worker being punched, strangulation, sexually inappropriate conduct among others.

Auditor-General John Doyle expressed his concern on how all these sorts of incidents are assessed as merely “mild” or “no harm” when apparently this approach of categorising understates the risks involved.

Under-reporting was prevalent because of the current complications in processing these complaints and staff are generally reluctant to report any cases of violence for fear that the management will turn a deaf ear on them and would not act on their favor, the report added.

Workers of related health industry look into violence as part of their job and did not want to file reports on incidents that involved patients suffering from dementia or delirium and therefore “couldn’t help it.” Healthcare workers are among those who are most at risk of workplace violence, and several alarming attacks have been reported about it in the past few years.

In 2013, two nurses were attacked by a teenager patient at the Royal Children's Hospital, while three psychiatric nurses at the Monash Medical Centre were sexually assaulted by patients. In February last year, Neurosurgeon Michael Wong was stabbed 13 times at the Western Hospital that resulted in life-threatening injuries.

Victoria’s top public health services, the Department of Health and Human Services (DHHS), Ambulance Victoria, and WorkSafe were evaluated for the report that was scheduled in Parliament.

The report essentially suggested a dramatic culture change so health workers are urged to report any incidents of violence at work, and for health services to plan out their preventive approaches on attacks on staff.

Health Minister Jill Hennessy recommended the need for better leadership to realise the needed changes on the existing culture. She however explained that these changes will not be easy and plans of reducing violence against healthcare workers will not be particularly fast as they have to deal with patients with alcohol, drug, or mental health issues.

Ambulance Victoria has received the report and is currently reviewing the training, regulations, policies, and relevant procedures covering occupational violence.

Lisa Fitzpatrick, Victoria branch secretary of Australian Nursing and Midwifery Federation called for the immediate adoption of the recommendations of the Auditor-General. She stated how the normalisation of any kind of occupational violence incident, regardless of severity, will eventually scare the health workers away from the public hospital system unless something is done to remedy the situation.