Is Working Remotely An Occupational Hazard? 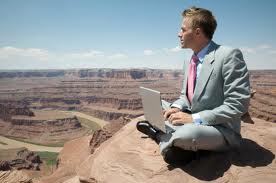 The Sage Australia Business Index 2013 reported a survey of 400 employers and discovered that 50% of their sample was allowed to work remotely. Of that 50%, around 88% had HR policies pertaining to work practices. Surprisingly, an estimated 60% replied that their HR policies were mostly informal.

Given these findings, Sage business management CEO Craig Osborne believes that majority of business engaged in mobile and remote work are still unprepared to face the challenges of occupational health and safety risks.

Osborne said the survey results were favourable, showing Australia is embracing technology and saw the benefits in mobile working. But he was wary that Human Resources had not yet appreciated how to manage work related safety risks and in managing workloads.

"There is a whole raft of Occupational Health and Safety regulations that still need to be met by an employer, which Human Resources need to police." Mr. Osborne mentioned supporting the fact that working remotely is now a mainstream trend. However, he sensed that policy development seems to be stagnant in terms of implementations.

The use of mobile phones is discouraged to limit work related injuries or other occupational safety risks. Human resources need to communicate when mobile phones can be used to prevent accidents that can happen if an employee is using a cellular phone device while driving a vehicle. “HR needs to be clear about policies relating to health and safety issues as people to ‘doing more out on the road’ comes with increased risks,” he said.

Similarly, employees need desks and ergonomic chairs and sufficient lighting who are working remotely. There is liability involved if the employee becomes hunch backed or pear shaped.

On a positive note, the study also found out that almost two-thirds of Australian businesses that adhere to mobile working policies can deliver higher value to business. The remaining 30% of employees believes they realised intangible benefits such as work satisfaction, boost in morale, reduced absenteeism and higher productivity. The study found an estimated 20% of businesses engaged in mobile and remote working had better staff retention and morale while 50% believed their business was more productive. Half of those surveyed said they were planning for 75% of their workforce to be mobile in the future.

Meanwhile, Mr. Osborne noted some conflicts among employees who are capable of working from home and those employees who aren't. “People who must come into an office have a higher cost – including business wear and travel. I wouldn’t be surprised if you see salaries differentiated in the future to reflect the savings you make working from home,” he said. “Employers might find themselves being asked to compensate employees for costs of travelling into the office in the future. So HR needs to work on setting some boundaries for expectations,” he added.

However, there are also negative factors that impact employee’s health with this mobile work set up. Sage cautioned Human Resources to properly put in place systems to protect the health of staff like limiting staff fatigue. “The proliferation of smart phones and ease of access to email has meant people no longer work routine hours. However, to reduce staff fatigue and stress HR needs to communicate that just because someone can be contacted 24/7 doesn’t mean they should be.” said Mr. Osborne. He added, “HR needs to communicate to staff and management that hours shouldn’t be extended just because someone is working from home.”

An "office mindset" will prove to be effective to eliminate work fatigue. “People should have a separate workplace in their home and get into the habit of ‘going into the office’ and ‘leaving the office’ each day,” said Mr. Osborne.