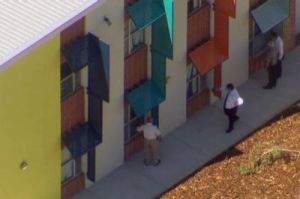 In some cases, it is required by the law or it is directed by the Children's Court that a person over 17 years be held at Banksias Hill instead of being placed in an adult prison.

A number of cells were damaged during the January 20 riot. As a result, most male detainees from Banksias Hill have been temporarily relocated to Hakea Prison to ensure that repair works will progress in a safe and timely manner.

At the Hakea Prison, the young people were held in separate and secure accommodation in units 11 and 12. These units have been gazette as a young offender detention centre and have come under the authority of the superintendent of Banksias Hill.

The youth custodial officers were concerned that juveniles could be a safety risk to them if they were allowed to return to the only juvenile detention centre in WA soon after the violent riot. The officers fear that the WA Department of Corrective Services hasn’t rectified the security issues at the Banksias Hill Detention Centre, following the riot.

So far the department has spent $1.5 million to repair the facilities but the officers concerned are saying that the security issues have not been fixed. They are calling for the department to push the proposed return of the juvenile inmates to a date later in the year instead of the proposed 26th of August, 2013.

The Community and Public Sector Union (CPSU) said that the officers have been negotiating with the department up until this week but they felt compelled to hold a stop work meeting today because the department is planning to reopen the facility before security issues are resolved. They are requesting that the fences be modified as they can be easily scaled by detainees. They are also asking for the third recovery team to be at the facility, who are equipped with handcuffs to act as first responders to incidents.

The officers also said that they need proof that remedial works on offices and cells have been completed. They also wanted assurances that the new security measures including metal detectors, have been fully tested. They are also seeking for other improvements including an extra recreation area for the young prisoners and additional staff training.

The CPSU also expressed an objection on getting prison officers from adult facilities to work at Banksias Hill. The department should work harder to hire trained, full-time youth custodial officers instead. The riot in January was sparked by 23 hours a day lockdowns because of a lack of staff. They don't want another riot to happen, and they want a safe environment to house the detainees.