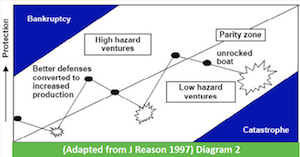 All organisations produce something, whether it’s either goods or services. The problem is that the production process, whatever it is, even if it’s in the government sector giving out advice, that’s still a process and it’s still providing a service, exposes people to risk.

The real problem is that the production process is generally well understood. You have so many machines and we put things in the machines and we get things out the other end. Or you have somebody behind a counter; the more customers that come in, the more sales you make. Or you have people coming and asking for advice and you give advice and at the end of the day you say you saw 15 clients today. That’s production. It’s a production process. It is very easy to understand. You do more of this and you definitely get more of that.

It’s a question of, what is the real level of risk that you are exposed to?

The law says to provide a safe workplace; provide controls commensurate with the level of risk. The problem is that the partnership between production and protection is rarely equal:

All rational managers agree on production and protection being equivalent – in the long term. It is in the short term that conflicts arise, and production generally wins.

As production pressures increase, resources are allocated to achieve this without corresponding margins of protection – until an accident occurs!

The line in the middle of diagram 2 is a balance between doing the right thing and not doing the right thing. If you go too far down one end you end up in catastrophe. If you spend too much money on protection you go bankrupt. Clearly no one wants to be the safest organisation that ever went out of business. On the other hand you really don’t want to blow the place up and take half the suburb with it either.

“Yep, I have to look after the law, I have to comply, I have to do all the right things, and so I have a good safety system, then we run into the GFC and have to cut costs, orders are down a bit, so we better start trimming some of the systems that we have in place for safety, training, and we’ll postpone replacing that machine”.

So over time the system degrades until you have an incident and everybody wakes up. “Whoops, we had an incident, oh! We should have done some more training,” and WorkSafe comes in and says “your training matrix is out of date, and that machine’s certification is out of time,” etc, etc.

Evidence shows that lengthy periods without serious accidents can lead to a steady erosion of protection. It’s easy to forget to fear things that rarely happen. Urgent Vs Important – “there is always something more pressing”. If production increases, then doing nothing on protection is not an option – the safety margins will decrease (think increase with frequency) and neglecting existing defences and failing to provide new ones can lead to catastrophe.