Australian brush manufacturer fined $26,250 after worker’s finger was cut on a machine 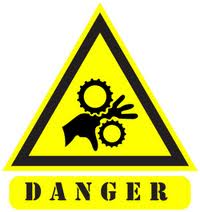 Rokset Industries Pty Ltd, an Australian-based large manufacturer of premium quality painting and decorating applicators and accessories, was fined by the Industrial Court when a worker’s finger was caught in a machine that had no guard in place, and was cut. The penalty for Rokset Industries is $26,250 plus other legal fees.

The incident happened on March 3, 2011. A Rokset worker was operating a brush-making machine when the incident occured. He placed his hand in the machine to clear some fallen bristles but his right middle finger got caught in the moving machinery. As a result, his right middle finger was broken and lacerated. He underwent surgery and physiotherapy afterward for recovery. He has not fully recovered. He cannot fully move his finger above the knuckle.

SafeWork SA was responsible for the prosecution of the concerned party. Rokset Industries was found guilty of breach of the Occupational Health, Safety and Welfare Act 1986 for failure to provide and maintain their own plant in a safe condition. Industrial Magistrate Michael Ardlie said Rokset Industries had demonstrated contrition by its actions, including an early guilty plea and making the effort to keep the worker employed despite closing its manufacturing business.

Bryan Russell, Executive Director of SafeWork SA, was surprised to hear the news about the incident. According to him, Rokset Industries has been operating for decades without any incident. The manufacturing company has their guards in place and they use appropriate signages. Nevertheless, the incident happened and it served as a reminder to all employers to never go careless on the health & safety of all employees in order to avoid such injuries.

Although the company pleaded guilty to the incident, Rokset Industries was not totally neglectful of their duty towards work health & safety. Magistrate Ardlie said that the defendant did not ignore the issue of safety. He noted that there were safe operating procedures for the machine and guards on other parts of the machine. He was convinced that the injured worker became reckless also in handling the machine. The worker should have taken full responsibility on taking precautions to prevent any injury but he neglected it so he suffered as well.

After the incident, Rokset Industries was responsible enough to do necessary adjustments to avoid any similar incident from happening again. The Industrial Court was informed that Rokset Industries applied quite a number of protective measures on their machines. The company was tempted to close out their manufacturing business but they recovered to think straight and resolve the issue instead. However, a guard is still to be installed on the part of the machine where the incident occurred.